Extending the frontier of visual computing, real-time physically-based interaction via graphical display and haptic (touch-enabled) rendering have the potential to increase the quality of human-computer interaction by accommodating the sense of touch. They also provide an attractive augmentation to visual display and enhance the level of immersion in a virtual world, and have been effectively used for several engineering, scientific, and medical applications.

The sense of touch is one of the most important sensory channels. The human tactile system provides a unique and bidirectional communication between humans and their physical environment. Researchers have investigated the problem of rendering the contact forces and torques between three-dimensional virtual objects. This problem is known as six-degree-of-freedom haptic rendering, as the computed output includes both three-degree-of-freedom forces and three-degree-of-freedom torques. We present an overview of our work in this area. We suggest different approximation methods based on the principle of preserving the dominant perceptual factors in haptic exploration.

We present an approach for simulating the rigid body dynamics of a haptically manipulated object using implicit integration. Our formulation requires the linearization of contact and manipulation forces, and provides higher stability and responsiveness than previous methods. The linearization of contact forces, coupled with fast, perceptually-based collision detection algorithms, enables us to perform highly stable and responsive six-degree-of-freedom haptic rendering of complex polygonal models. 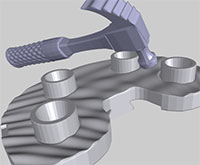 Surface texture is among the most salient haptic characteristics of objects; it can induce vibratory contact forces that lead to perception of roughness. We present a new algorithm to compute contact forces and torques between textured objects using low-resolution geometric representations with texture images that encode surface details. We introduce a force model based on directional penetration depth and describe an efficient implementation on programmable graphics hardware that enables interactive haptic texture rendering of complex models. Our algorithm takes into account important factors identified by psychophysics studies and is able to haptically display interaction due to fine surface textures that existing algorithms do not capture.

We introduce a sensation-preserving simplification algorithm for faster collision queries between two polyhedral objects in haptic rendering. Given a polyhedral model, we construct a multi-resolution hierarchy using filtered edge collapse, subject to constraints imposed by collision detection. The resulting hierarchy is then used to compute fast contact response for haptic display. The computation model is inspired by human tactual perception of contact information.

We present the DAB painting system with an intuitive haptic interface, which serves as an expressive vehicle for interactively creating painterly works. We introduce a deformable, three-dimensional brush model, which gives the user natural control of complex brush strokes. The force feedback enhances the sense of realism and provides tactile cues that enable the user to better manipulate the paint brush. We have also developed a bidirectional, two-layer paint model that, combined with a palette interface, enables easy loading of complex blends onto our three-dimensional virtual brushes to generate interesting paint effects on the canvas. The resulting system provides the user with an artistic setting, which is conceptually equivalent to a real-world painting environment. 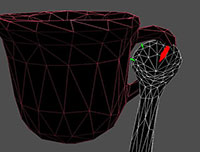 We present a six-degree-of-freedom haptic rendering algorithm using localized contact computations. It takes advantage of high motion coherence due to fast force update and spatial locality near the contact regions. We first decompose the surface of each polyhedron into convex pieces and construct bounding volume hierarchies for fast proximity queries. Once the objects are intersecting, the penetration depth is estimated in the contact neighborhood between each pair of decomposed convex pieces, using a new incremental method based on local optimization. Given the computed penetration depth values, multiple contacts near a local region are clustered together to further speed up contact force determination.

We present the ArtNova system for three-dimensional model design with a haptic interface. ArtNova offers the novel capability of interactively applying textures onto three-dimensional surfaces directly by brush strokes, with the orientation of the texture determined by the stroke. Building upon the framework of an earlier system, InTouch, it further provides an intuitive physically-based force response when deforming a model. This system also uses a user-centric viewing technique that seamlessly integrates the haptic and visual presentation, by taking into account the user’s haptic manipulation in dynamically determining the new viewpoint locations. Our algorithm permits automatic placement of the user viewpoint to navigate about the object, or to reposition the viewpoint.

We present several techniques for user-centric viewing of the virtual objects or datasets under haptic exploration and manipulation. Depending on the type of tasks performed by the user, our algorithms compute automatic placement of the user viewpoint to navigate through the scene, to display the near-optimal views, and to reposition the viewpoint for haptic visualization. This is accomplished by conjecturing the user’s intent based on the user’s actions, the object geometry, and intra- and inter-object occlusion relationships.

We present an algorithm for haptic display of moderately complex polygonal models with a six-degree-of-freedom force feedback device. We make use of incremental algorithms for contact determination between convex primitives. The resulting contact information is used for calculating the restoring forces and torques and thereby used to generate a sense of virtual touch. To speed up the computation, our approach exploits a combination of geometric locality, temporal coherence, and predictive methods to compute object-object contacts at kHz rates.

Interactive Multi-resolution Modeling and 3D Painting with a Haptic Interface

We present an intuitive three-dimensional interface for interactively editing and painting a polygonal mesh using a force feedback device. An artist or a designer can use the system to create and refine a three-dimensional multi-resolution polygonal mesh. Its appearance can be further enhanced by directly painting onto its surface. By coupling innovative haptic technology with visual feedback, the InTouch system allows users to naturally create complex forms and patterns.