The GAMMA research group is investigating techniques for rendering acceleration, with applications including walkthroughs of massive models. 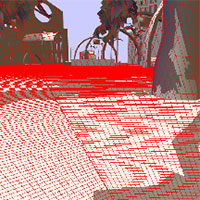 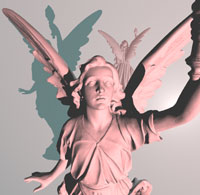 We present an algorithm to compute cache-efficient layouts of bounding volume hierarchies (BVHs) of polygonal models. We does not make any assumptions about the cache parameters or block sizes of the memory hierarchy. We introduce a new probabilistic model to predict the runtime access patterns of a BVH. Our layout computation algorithm utilizes parent-child and spatial localities between the accessed nodes to reduce both the number of cache misses and the size of working set. Also, our algorithm works well with spatial partitioning hierarchies including kd-trees. We use our algorithm to compute layouts of BVHs and spatial partitioning hierarchies of large models composed of millions of triangles. 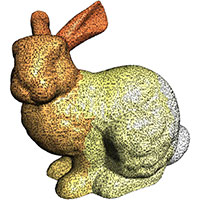 We present a method for computing cache-oblivious layouts of large meshes that improve the performance of interactive visualization and geometric processing algorithms. In our approach we make only general assumptions on the locality of geometric algorithms and make no assumption with regard to the particular data access pattern or cache parameters of the memory hierarchy involved in the computation. Furthermore, our formulation extends directly to computing layouts of multi-resolution and bounding volume hierarchies of large meshes. We develop a simple and practical cache-oblivious metric to estimate cache misses. Computing a coherent mesh layout is reduced to a combinatorial optimization problem. We designed and implemented an out-of-core multilevel minimization algorithm and tested its performance on unstructured meshes composed of tens or hundreds of millions of triangles. Our layouts can significantly reduce the number of cache misses. 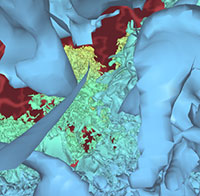 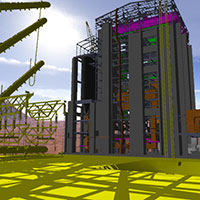 We present an algorithm for interactive generation of hard-edged, umbral shadows in complex environments with a moving light source. Our algorithm is based on a hybrid approach that combines some of the efficiencies of image-precision techniques along with the image quality of object-precision methods. We present interactive algorithms based on levels of detail and visibility culling to compute the potential shadow-casters and shadow-receivers. We further reduce their size based on a novel cross-visibility culling algorithm. Finally, we use a combination of shadow polygons and shadow maps to generate shadows. We also present techniques for level-of-detail-selection that eliminate the artifacts in self-shadows. Our algorithm can generate sharp shadow edges and reduce aliasing. 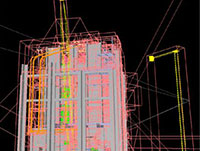 We present an algorithm combining view-dependent rendering and conservative occlusion culling for interactive display of complex environments. A vertex hierarchy of the entire scene is decomposed into a cluster hierarchy through a novel clustering and partitioning algorithm. The cluster hierarchy is then used for view-frustum and occlusion culling. Using hardware accelerated occlusion queries and frame-to-frame coherence, a potentially visible set of clusters is computed. An active vertex front and face list is computed from the visible clusters and rendered using vertex arrays. 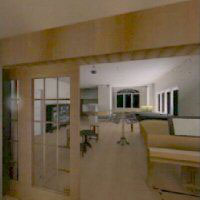 We present an incremental algorithm to compute image-based simplifications of a large environment. We use an optimization-based approach to generate samples based on scene visibility, and from each viewpoint create textured depth meshes using sampled range panoramas of the environment. The optimization function minimizes artifacts such as skins and cracks in the reconstruction. We also present an encoding scheme for multiple textured depth meshes that exploits spatial coherence among different viewpoints. The resulting simplifications, incremental textured depth meshes, reduce preprocessing, storage, rendering costs and visible artifacts. 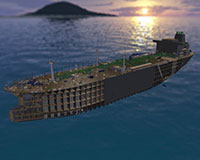 We present a parallel occlusion culling algorithm for interactive display of large environments. It uses a cluster of three graphics processing units to compute an occlusion representation, cull away occluded objects and render the visible primitives. Moreover, our parallel architecture reverses the role of two of the graphics processing units between successive frames to lower the communication overhead. We have combined the occlusion culling algorithm with pre-computed levels of detail and use it for interactive display of geometric datasets. 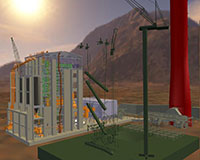 GigaWalk is a system for interactive walkthrough of complex, gigabyte-sized environments. It combines occlusion culling and levels-of-detail and uses two graphics pipelines with one or more processors. We use a unified scene graph representation for multiple acceleration techniques, and we present novel algorithms for clustering geometry spatially, computing a scene graph hierarchy, performing conservative occlusion culling, and performing load-balancing between graphics pipelines and processors. GigaWalk has been used to render CAD environments composed of tens of millions of polygons at interactive rates. 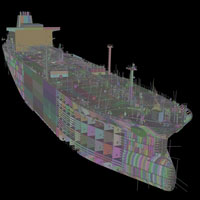 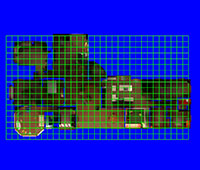 We present an approach for faster rendering of large synthetic environments using video-based representations. We decompose the large environment into cells and pre-compute video-based impostors using MPEG compression to represent sets of objects that are far from each cell. At runtime, we decode the MPEG streams and use displaying algorithms that provide nearly constant-time random access to any frame.

We present an algorithm for appearance-preserving simplification. Not only does it generate a low-polygon-count approximation of a model, but it also preserves the appearance. This is accomplished for a particular display resolution in the sense that we properly sample the surface position, curvature, and color attributes of the input surface. We convert the input surface to a representation that decouples the sampling of these three attributes, storing the colors and normals in texture and normal maps, respectively. Our simplification algorithm employs a new texture deviation metric, which guarantees that these maps shift by no more than a user-specified number of pixels on the screen. The simplification process filters the surface position, while the runtime system filters the colors and normals on a per-pixel basis. 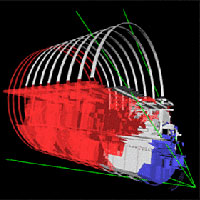 We present the use of mapping functions to automatically generate levels of detail with known error bounds for polygonal models. We develop a piecewise linear mapping function for each simplification operation and use this function to measure deviation of the new surface from both the previous level of detail and from the original surface. In addition, we use the mapping function to compute appropriate texture coordinates if the original map has texture coordinates at its vertices. Our overall algorithm uses edge collapse operations. We present rigorous procedures for the generation of local planar projections as well as for the selection of a new vertex position for the edge collapse operation. 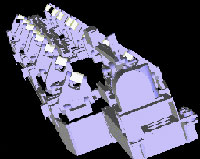 We present serial and parallel algorithms for interactive rendering of large-scale and complex NURBS models. The algorithms tessellate the NURBS surfaces into triangles and render them using triangle rendering engines. The main characteristics of the algorithms are handling of arbitrary surface topologies, the exploitation of spatial and temporal coherence, optimal polygonization, and back-patch culling. Polygonization anomalies like cracks and angularities are also avoided. 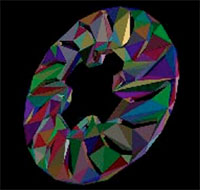